Homemade Chicken and Dumplings from Scratch

I started off craving a good bowl of homemade chicken and dumplings made from scratch.  It’s not even that cold yet but I had to have a bowl.  We just moved not that long ago and the recipe I normally use was in a box somewhere in storage.  After a few hours of going through boxes reminiscing over photos I just found again I finally found it!  It’s such an old piece of paper with spill marks from the previous times I had made it.  I really need to rewrite this recipe and laminate it so that I will have it forever.  Do you have a recipe like that?  Come to think about it there’s another recipe that I feel the same way about.  It’s my  delicious Banana Bread recipe.  It’s a rare recipe because it uses sour cream in the ingredients.  Not many recipes use this ingredient in banana bread so I would never want to lose this recipe either.

I used my favorite enameled cast iron dutch oven to make this recipe.  It’s a 6 quart pot and works perfectly for this recipe.  This recipe also feeds a lot of people.  It can feed 6 to 8 easily.

I’m a bit disappointed in the photos I took for this recipe.  I will have to update these photos when I make this meal again.  I was zipping right along making this recipe as the house was smelling so good that I forgot to grab some extra lighting.  The family was hungry because dinner was a bit later than usual so there was no making them wait any longer just so I could grab a few good photos.  I think the new back to school schedule has everyone a bit grumpy towards the end of the day around here.

NOTE:  If you are looking for a super simple recipe instead of a homemade from scratch, you’ve got to try our Easy Crockpot Chicken and Dumplings recipe.  It’s a no fuss kinda dinner. 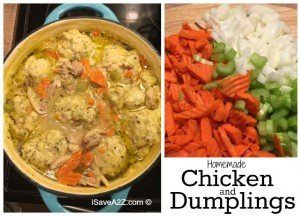 Homemade Chicken and Dumplings from Scratch

Here are a few process photos to give you an idea. This is the thickening paste you make.  It doesn’t look great but will make it taste amazing! Add the shredded chicken back to the mix once the vegetables have softened: Start mixing the dry ingredients for the dumplings:

This dumpling dough will taste amazing when it’s done: Scoop the dough into the soup: